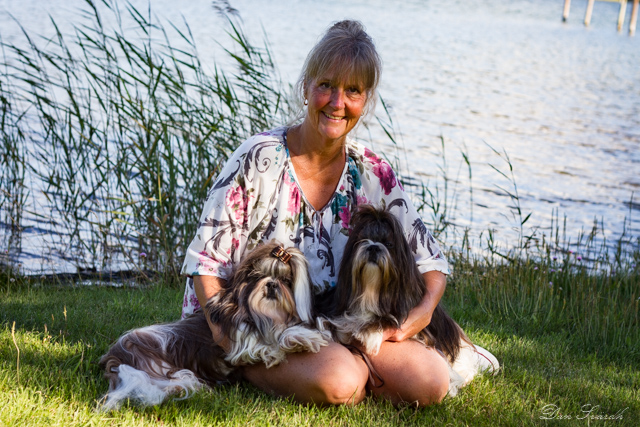 My name is Kathleen Berggren and I live in Uddevalla in Sweden.
It's located about 80 km north from Gothenburg


My first Shih Tzu was a male who came from kennel Wig-Makers in Skurup.
He was golden/white and I called him Oliver (Wig-Makers Un-Im-Peached).

I had been fascinated by the breed for a long time, and I had been visiting dog shows, joined the Swedish Shih Tzu club
and I also contacted several breeders to acquire as much knowledge and information as possible.

At that time, 1989, there was no Internet, so the information channels were limited
to phone and letters or visiting kennels.

I was so lucky when Oliver was old enough to move home with me!
I started to show him on dog shows and we both liked it very much.

I soon realized that Shih Tzu's like to live with other Shih Tzu's so in less than a year anorther
boy moved in with us.
This time it was a black/white boy from Tjörn.
Amie Bell Ama Azzaro, aka Kasper.

Then it went on ... Nalle, Wig-Makers Will Do, moved in the year after that.


After a few years, I became interested in breeding and puppies.
I started to look for a female, and made contact with the Kennel Fossella in Skurup.
Felicia, Fossella Handle With Care, was born March 23, 1993 and
March 12, 1997, she received her first, and only, litter.

This was the start of my breeding.

Now it has been over 25 years since I got my first Shih Tzu.

The old dogs are naturally not with us anymore, but new ones has taken over.

So far we have had 6 litters in the kennel.

I don't want to leave the mother and puppies alone, so it requires a lot of logistics to make it work.
I've to save up hollidays so I can be at home during the entire time
until the puppies moves to there new homes (10 weeks).

All my puppies have moved to fantastic homes and to lovely families.
We are in contact with each other throughout the dog's life, and for me as a breeder it is
so important to be involved.

Not only when the dog is a puppy but also when it becomes an adult and old dog.

I like to show my dogs on dog shows . I think it's funny.
I meet Shih Tzu-owners and other friends of other races.
In the past years we have had great success, which naturally encourages a little extra.

Besides Shih Tzu I have now also a Pekingese.
I got her on my 50th birthday (2014) from my beloved partner, Dan.
A better birthday present is probably hard to find.


I have earlier in life been active in a working dog club
where I have been the leader of obedience courses.
I had a brown Standard Poodle who I trained/competed in obedience,
but none of us took it really seriously, so we trained the most to the everyday needs
and generally had fun.
Althea became 12 years, and we had many good years together.

You can immerse yourself more at my sides, if you wish.

My old dogs and their pedigrees ... Memory

The dogs I have today ... Males and Females. 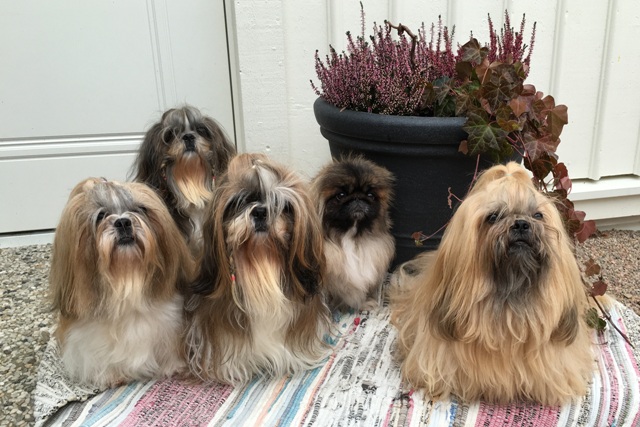 If you are interested in Shih Tzu, you are welcome to send an email.